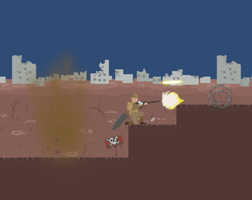 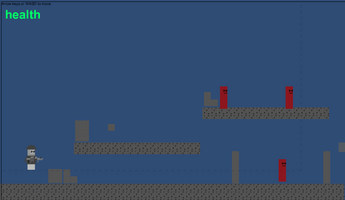 Within my graveyard of incomplete, unpublished work, I merged two projects of mine into one.

The first was a side scrolling, WWI themed, tower defense game.  I called this game "WWI Ground Defense".  Ultimately, I couldn't figure out how to make the AI path/terrain unique enough to make the gameplay interesting since it was a side view vs. a top or isometric.

The other was another 2D, modern, commando-like, run and gun shooter with blocky art work.  This game was called "Forward Facing Fury", because you could only look to the right, which was an attempt to simplify the gameplay.  Nothing was really wrong with this game, I just lacked any self control and spun it into several other different incomplete games.

Now we come to this 'game', and it is called "Massive Damage: WWI", because the original intent was that you were supposed to take a tremendous amount of bullets/artillery strikes without dying or even getting hurt.  The player would not take damage as long as they were on the run.   However, that's not the case in this 1st version, as it was not as easy as I thought to implement (just like any other game idea I come up with!).  Maybe it will end up in my graveyard of unfinished projects, but at least it made it to a devlog!

Final note; I'm just one dude that works on this a few hours/week - so please have mercy!